Our favorite cold brewed tea! This tea benefits from the specific taste of the Higashi Sonagi region where it is grown; refreshing and nutty with citrus high notes, this flavor profile is called “sukkri” in Japanese. The stem material mixed with the leaves is what gives this tea its umami “punch” and makes it a superior cold brew- we’re sure it will be among your favorites as well. 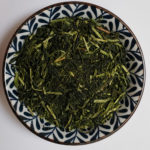 Higashi Sonagi(Nagasaki Prefecture): Higashi Sonogi has a long history of growing tea that stretches back over 500 years. Grown in the mountains above orange, plum and mandarin trees.

Nakayama Kosuke’s family farm has been operating for 70 years in Higashi Sonogi. To preserve their land and its soil, they use only organic fertilizers that they prepare themselves. The Nakayama family works hard to build partnerships with other regional tea farmers as well as other Kyushu based industries

“Second flush” teas, also called “twig tea” or kukicha in Japanese, are harvested a little later in summer after the premium- and high-grade teas have been harvested. The leaves continue to grow and when it’s time, the tea is cut, this time closer into the branch so a little of the stem matter is cut along with the leaves. Every rebrew is a little different, though no less delicious. Naturally very low in caffeine, this is a tea that Japanese parents give to their children, sometimes mixed with juice, before going to sleep.

Start with a heaping teaspoon of tea leaves in a 750 ML Cold Brew Bottle or your favorite cold brew container. Fill the container up with water(approximately 25 oz) and let steep in your refrigerator for a minimum of 3 hours or overnight